Home About Us Exhibits Visit Us Contact Links Gallery

The Trenchard Museum aims to preserve and display items that relate to the history of Royal Air Force Halton. The museum was named in honour of the man who is regarded as the Founding Father of the Royal Air Force, and also who founded the Aircraft Apprentice scheme with which the good name of Halton has often been synonymous.

The Museum was opened by Viscount Trenchard, grandson of Marshal of the Royal Air Force    Viscount Trenchard on the 26 June 1999, funded and supported by the RAF Halton Apprentice    Association (RAFHAA). Since then, the Museum’s collection has grown to include a myriad of    artefacts including 3 complete aircraft; 2 cockpits; 9 aero engines and a range of displays, models    and memorabilia which illustrate life, training and notable events in the Station’s history.

The James McCudden Flight Heritage Centre (JMFHC) has been created to promote air    mindedness in RAF recruits, air cadets, school children and other interested parties. It extends the scope of the Trenchard Museum into the explanation of the fundamentals of flight using redundant training aids and equipment purchased with funds donated by the RAF Charitable Trust, The Heritage Lottery Fund and the Rolls-Royce Heritage Trust. 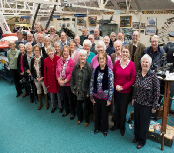 The JMFHC was also opened by Viscount Trenchard on the 26th June 2014. A young James McCudden came to Halton 100 years ago as an engine mechanic with No 3 Squadron Royal Flying Corps on Army Manoeuvres. James subsequently became a pilot in the Royal Flying Corp and was one of the most decorated pilots in WW1.

There is a Grasshopper Glider at its centre with videos on the history of flight, aero engines, a wind tunnel, aero instruments, a model airfield, a collection of air navigation instruments, and a Chipmunk cockpit with a flight simulator to match. Additionally there are 3 working Link Trainers which were used to train pilots in instrument flying. Also on view is the museum’s workshop and what will become a full size replica of the Mayfly. This small biplane was designed by the training staff and built by staff and apprentices here at Halton in 1926. 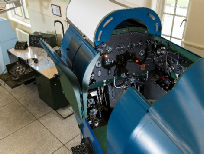 These events are designed for school groups Year 5 (age 9/10) and Year 6 (aged 10/11), and include talks on Aerospace and Aviation with interactive workshops  promoting Science, Technology, Engineering and Mathematics (STEM ). For more details click here.